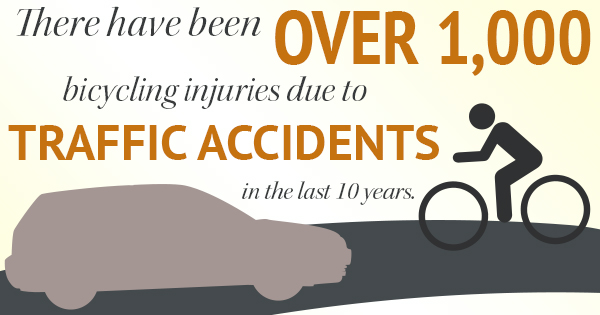 South Dakota bicyclists and law makers are attempting to reduce bicycling injuries by making the roads safer for bicyclists. Bicyclists face a higher risk of crash-related injury and death than motorists, even though only 1% of trips taken in the United States are by bicycle. Because most bicycling deaths occur in urban areas and in non-intersection locations, the South Dakota Department of Transportation has proposed legislation that will require motor vehicles to stay at least three feet away from bicyclists while passing.

House Transportation Committee Chairman Mike Verchio did not expect a great deal of debate for the measure, but the Committee has so far been unable to reach a consensus about the exact size of the buffer or whether certain types of roads will have different rules. Verchio advocates for a larger buffer on rural highways.
“It sounded so simple when it first came up,” Verchio told the Argus Leader. “It’s a big deal. Safety’s a big deal, and I just want to make sure we’ve got it right.”

The House Transportation Committee has appointed a sub-committee to work on wording the bill correctly. Opponents of the bill are concerned that it may weaken existing law, and others claim that a specific distance is unnecessary. In addition to the distance regulations, the bill also prohibits cyclists from passing right-turning vehicles on the right, a common cause for car and bicycle accidents.

Bill Nevin, legal counsel for the South Dakota Department of Transportation, told South Dakota Public Broadcasting that there have been over 1,000 bicycling injuries due to traffic accidents in the last 10 years, and that seven of the injured cyclists died.

Opponents of the bill are quick to point out that 37% of fatal car and bike accidents involved a driver or cyclist who had been drinking, not by cars passing too closely. Supporters of the bill, including legislators and bicycle injury attorneys, are confident that the additional required buffer zone between bicyclists and motorists will dramatically reduce the amount of bicycle accident injuries that cyclists experience.